A 24 year old fucktard called Akil Mali slapped Gauhar Khan for wearing a short dress two days ago and social media is abuzz with posts written by people who are either praising/abusing the guy or speculating that this was just a publicity stunt.

As with all other ‘trending topics’ I refrained from commenting because let’s face it, you don’t need one more person telling you how this man’s actions were wrong at so many levels. There surely is no dearth of people who believe that this guy was definitely not being a “good muslim” trying to show the path of righteousness (which clearly some really misogynistic men decided for her) to a lost soul. So I had decided to keep quiet about it and I did.

Until I saw this: 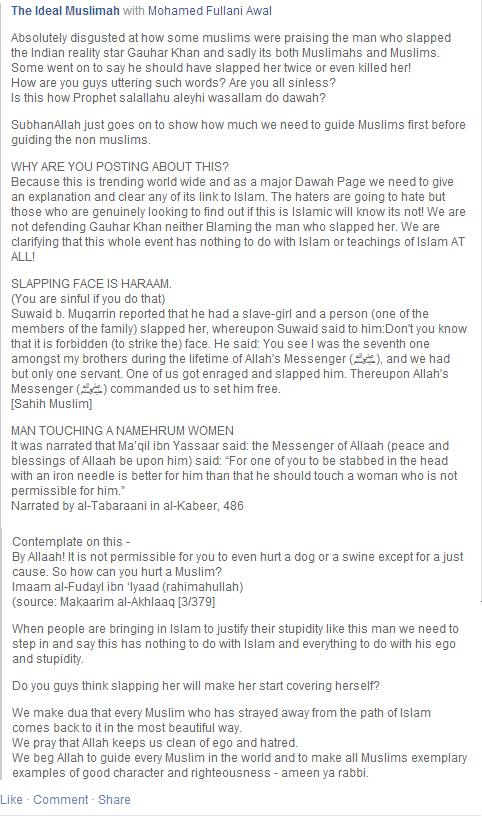 So from what I understand, he was wrong in slapping the actor not because it is a human rights violation but because if he were a good muslim (a) he would not touch a woman he does not own, (b) would realize the futility of slapping her because slapping her will not make her cover herself up because somehow chaste women always keep their bodies covered, (c) he would not have hit her on the face because Islam does not allow hitting people on their faces and hurting Muslims.

Of course I’m puzzled by all this and have thousands of questions swarming in my head, such as – is it ok to hurt a non-Muslim, is hitting people elsewhere on the body okay – but these questions are not the reason for my outburst.

My question is – why does it have to always come to religion? Why can’t we, as a country, see this matter as a human rights issue instead of debating whether his interpretation of his religion was justified? Is self-righteousness (even if it is rooted in a deeply flawed understanding of his religion) enough to give this man an excuse for physically assaulting a woman? And why do people feel the need to justify that his actions are not endorsed by their religion? Surely no religion supports crime – can we not be mature enough to dismiss the applause coming his way as applause coming from equally misguided people?

It upsets me that we think of people as Muslims/Hindus first – and human much, much later – and sometimes not even then. Am I the only one that can see the elephant in the room?

24 thoughts on “of elephants in the room”

Say something. You know you want to! Cancel reply

"Suppressed Randiness"
Loud Thoughts Voiced Out
From zero to zygote