There’s no question in my mind that that letter came to me just when I needed it. I’m certain it came to make me smile on a particularly gloomy day.

And yet, after the euphoria faded, I cried for the first time in three days. Then the baby woke up and wham! Just like that, I got sucked into motherhood.

Between changing dirty diapers, breastfeeding, potty training, research on vaccines, gentle parenting, learning philosophies, playschools, and countless google searches on ‘is my child a psychopath’, I just forgot about the letter.

I remembered a whole year later, when Mister said that it was the anniversary of Z coming home in my arms. I didn’t remember what the letter said, but I remembered vividly how it made me feel.

So I spent the next few days actively searching for it in odd places, but I never found it. I eventually gave up any hope of seeing it again.

A month ago, the letter found me again when my child was sick and I was full to the brim with self-doubt, as mothers often are.

“Somehow whenever I think of you as a mother, the image of a woman who shares her stories, some funny and outright embarrassing and others that have a lesson or two hidden, one who is fiercely protective and also lets them speak their minds, never enforces her opinion in matters of love and religion and always a guide, friend and fellow traveler in the course of life” 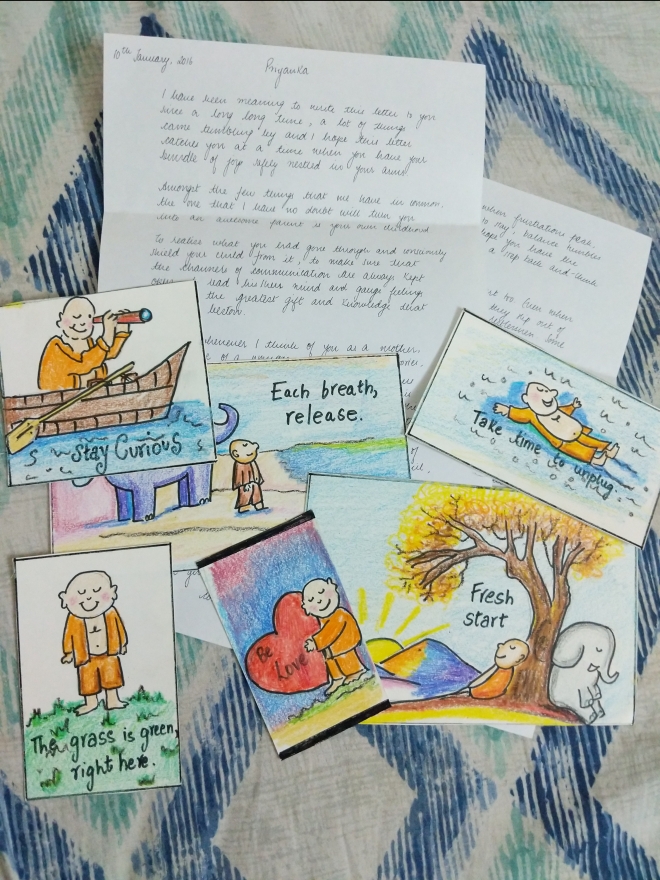 Thank you, Nisha, for reminding me of what my true north as a parent is. I’m eternally grateful. 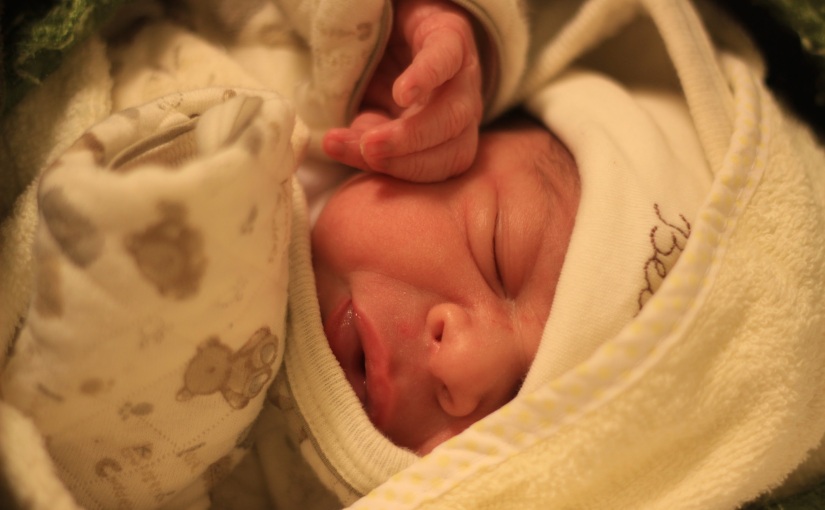 With the newborn nestled in my too-tired arms, I looked at Mister and mom’s happy, excited faces – none of them had left my side even once through the two nights we spent at the hospital after I gave birth.

As Mister pried open the lock on the house, I waited behind him, feeling intensely unhappy. I was about to walk into the door for the first time as a mother, into an untidy, dusty old home instead of a “Welcome home baby” banner or a red carpet.

As the door creaked open, I realized that there was a carpet alright – made with the dust and the mail that had accumulated while we were gone. Mom picked it up, and as we struggled to settle down, she announced that one of them was addressed to me.

I was exhausted, and I asked Mister to check what it was. Hey, it looks like fan mail, he said. From the girl in Hyderabad who sent you a letter before.

He opened his mouth to tell me it could wait until he had put the luggage down (I had packed a pretty big bag for the hospital), but I suppose he sensed how I was feeling so he read the letter anyway.

I could physically *feel* the happiness flood through me as I heard the first few words. I hope this letter catches you at a time when you have your bundle of joy safely nestled in your arms.

There’s your warm welcome, I said to the baby. I like to think that he smiled in his sleep.

If I had to put my finger on the single most unproductive thing I do when I go to work, it has got to be sitting through mind-numbing meetings, frequently nodding (off) and pretending to care. Today was no different.

Until I heard Dudebro say: So, what do you guys think?

My mind went from “keep your head down” to “fuck this shit” so friggin fast.

So you don’t care what the women think?

I asked if you only wanted the opinions of the men in the room.

Of course not. I asked all of you guys.

Well, I’m not a guy. Neither are those two.

He looked mortified, and though I said I was only kidding, I really wasn’t and he knew it. Dudebro knows better. I have a reputation, and he’s fucking scared of me.

I was congratulated later by many people, for having “balls” and taking what is going to be “a giant leap for mankind”. These, btw, are the same people who go around rolling their eyes every time I speak up against their casual misogyny. Well, I understand. I’m that whiny “feminist” who just doesn’t have a sense of humor. I’m constantly complaining about how oppressed women are, when it’s just words.

But are they really just words?

It’s almost like if all this vocabulary just appears out of thin air; as though these things are said by unremarkable people, without any of these words having any meaning and place in any sort of systemic oppression.

But it does, doesn’t it?

Every time you address a mixed group as “guys” you’re erasing the women in it.

Every time you call someone “feminazi”, you’re equating women’s struggle for freedom from patriarchy with fascism.

Every time you jokingly call someone a “pussy”, you’re labeling women as the weaker sex.

You don’t need a degree in either linguistics or gender studies to know this, dudebro. Word have meanings. Use them carefully.

Honk if you agree.

Do you speak up against casual misogyny? Why do you think we treat men as the default human? What changes can we make to our vocabulary to make language less offensive to us “feminazis”?

I opened my neglected, timeworn blog half-expecting messages that go “where are you” and “hope you’re okay” and “I’m worried for you”. And when I found nothing, I didn’t really know what to do with the knowledge that nobody – not one person – cares if I’m suddenly gone.

It was hard to accept, but after a week of wallowing in self-pity I’ve realized what a jerk I have been all this while, disappearing again and again for months together without a word about where I’m going or why, or if and when I’ll be back.

Here’s the thing – I haven’t said anything because I didn’t know how to explain how I’ve been feeling lately. The illusion of the freedom my anonymity affords me has, over time, degenerated into a bitter, painful sense of isolation from the *real* world where other *real* people live.

Besides, would I choose anonymity if I were a man? I don’t think I would. Like Woolf said, through most of history, anonymous was a woman.

So I’m done with anonymity, and I’m done hiding.

Call me Priyanka, will you?

When I was young, I tutored a young girl three or four years my junior. Over time, we drifted apart, and she became nothing but a dim memory of somebody I had once found very amiable.

I ran into her at the mall recently. I saw her first – I could’ve ignored her if I wanted; I had all the time I needed to make a U-turn.

Instead, I waved like a maniac and invited her to coffee.

In 20 minutes, I found myself sitting cross-legged on the Café Coffee Day couch, trying very (very) hard to look interested in the one-way conversation about her daughter. It didn’t help that my drink was disturbingly depressing. Each sip tasted worse than the one before.

Wow! How old is she now?

Thirteen and a half.

Years? My eyebrows shrunk to half their size as I strained to do the math.

You’ll never stop joking, will you? She threw a cushion at me, smiling. Months, baba!

I rolled my eyes at her inwardly for the rest of the evening. How does the world keep spinning with a shockingly ridiculous person who can’t discount that one odd month (and fifteen days) off her child’s age? Is it so hard to say “a year”?

I pretended to count on my fingertips (yeah, I’m mean when I want to be) and said – oh, just over a year, then. Is she walking already?

She proceeded to take me through a list of ALL the milestones her baby had achieved, and then talked at length about how she thought her baby was going to be an underperformer because she had started to talk so late.

I ran out of there a fast as I possibly could. Just when I heaved the proverbial sigh of relief, my phone buzzed.

Do you know any such child-obssessed parents or someone who has created an entire FB profile for their baby? What are the other annoying things that people from your past do now? How many photos of your baby do you have on your phone?

"Suppressed Randiness"
don of all trades

Loud Thoughts Voiced Out
From zero to zygote